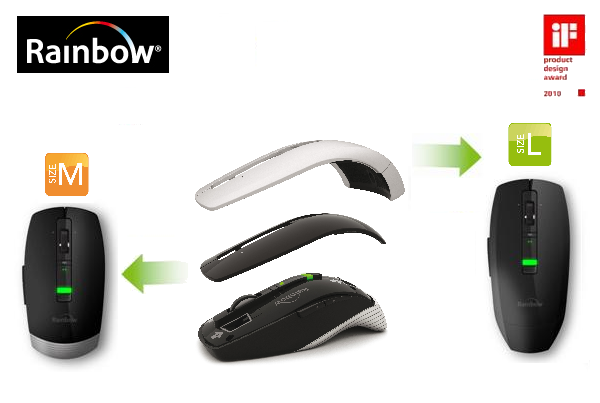 One day, Wim was having lunch at his place with Xavier Llopis and Juan Carlos Sanz, owners of Rainbow Computer, when he showed them the idea he had: MiMouse, a mouse that would fit every hand perfectly. In fact it was one of the very first ideas Wim put on paper to be realized after WiMedia would be founded. It generated from a problem Wim experienced in ICT retail: end customers complained about not having a mouse that fitted their hand but retailers wouldn’t offer more choice as leading vendors weren’t offering different sizes and if they would take it from niche players it would increase dramatically the number of SKU’s.

Conviced by the idea Xavier and Juan Carlos took it back home to Spain and Wim started to work fulltime for Rainbow. The Fit-U mouse worldwide as it was called by Rainbow, was designed by Misik Design and produced by MLK Industries, Shenzen China. Although 5 different sizes weren’t feasable and aluminium and leather were too expensive as materials the Fit-U mouse won the prestiguous iF Design Award 2010 at CeBIT 2010 and the idea was raved by all leading tech websites like The Gadgeteer , Techspot and Gizmodo “The concept of being able to take a regular-sized mouse, swapping on another cover and turning it into a travel-sized mouse is a neat idea.”

Even now, many years later, it is continued to be sold by MLK under the Rapoo brandname thanks to its timeless design and it is still one of the best looking mice in the world.

Do you want an original idea for a new product? Don’t hesitate and get in touch. You might be surprised what we can do for you.

Wim and Elke combine Sales, Marketing and ICT. Providing marketing and sales services we believe to help companies to realize more turnover, profit and to achieve more marketshare. So we founded Wimedia to do so.

FRESH FROM THE BLOG